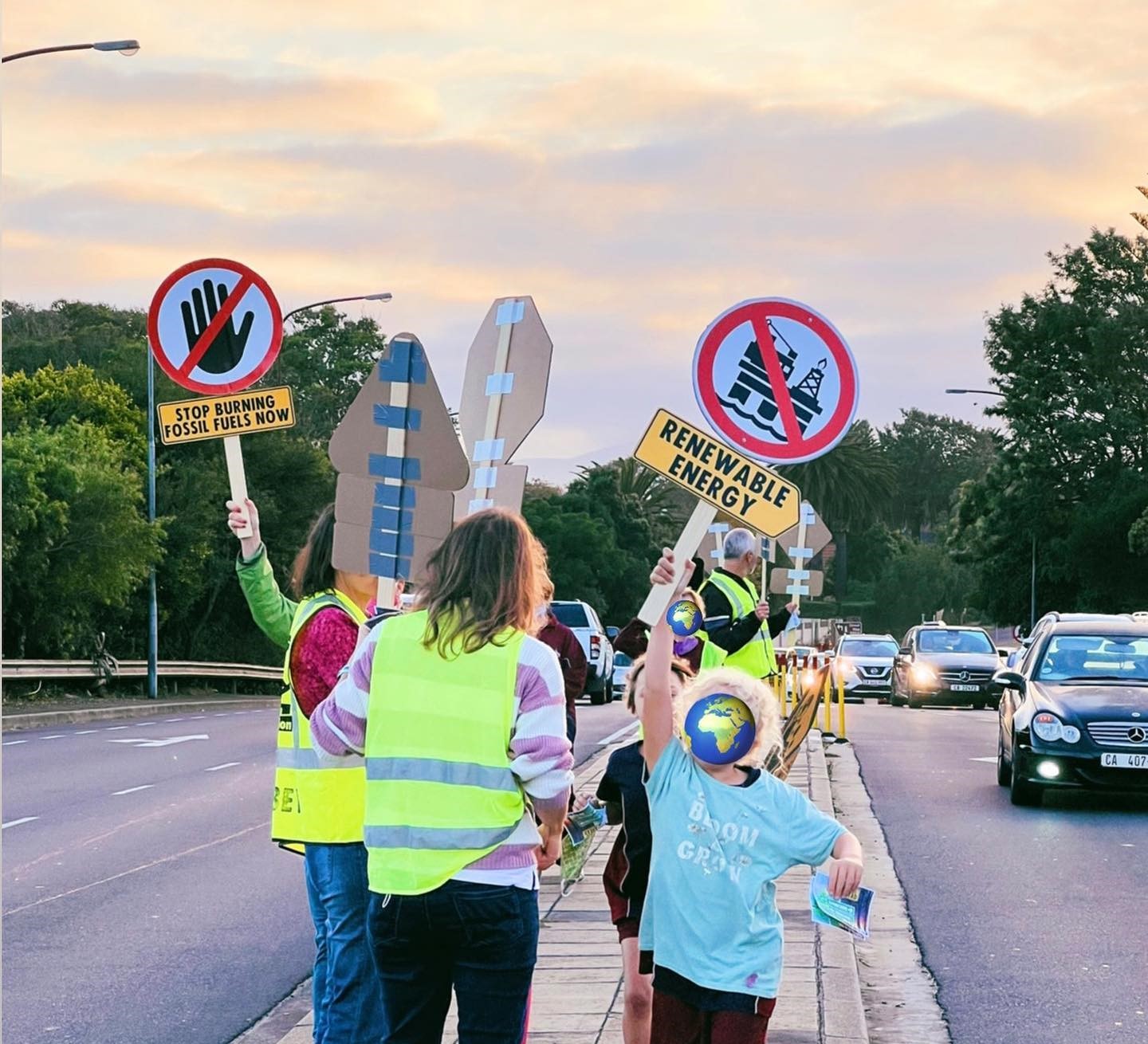 Environmental activists held a demonstration in Pinelands to warn of the impact of fossil fuels on climate change.

About 25 members of Extinction Rebellion, a global environmental movement, held up signs in early-morning traffic ahead of Forest Drive bridge, on Thursday April 21, calling for an end to fossil-gas exploration and extraction.

One of the organisers, Jacqui Tooke, said Extinction Rebellion used non-violent civil disobedience in an effort to halt mass extinction and minimise the risk of social collapse.

The movement, she said, believed the planet was facing an unprecedented global emergency and it called on society to “act now” to reduce greenhouse gas emissions to net zero by 2025 and “be the change” in creating a culture of participation, fairness, and transparency.

“The government must create and be led by a citizens’ assembly on climate and ecological justice,” she said. “Only the common sense of ordinary people will help us navigate the challenging decisions ahead. The dire warnings in the recent Intergovernmental Panel on Climate Change (IPCC) report 2022 tells us we have a tiny window to avert catastrophic climate changes.”

The IPCC report found that human-induced climate change was causing dangerous and widespread disruption in nature and affecting the lives of billions of people around the world, despite efforts to reduce the risks.

In the report, IPCC chairman Hoesung Lee said: “It shows that climate change was a grave and mounting threat to our wellbeing and a healthy planet. Our actions today will shape how people adapt and nature responds to increasing climate risks.”

Demonstrator Astrid Hadley said seeing so many people standing in solidarity against climate change gave her hope that they could make a difference to stop the destruction of the planet.

Demonstrator Heather Hill said she felt a mixture of emotions while standing at the side of the road. “Feelings of gratitude for an opportunity to try and make more people aware that our lifestyle choices were going to destroy us. Feelings of urgency to get the message out there. And feelings of sadness and introspection as I realised how complicit I still am in our climate crisis, despite efforts to care for our Mother Earth. We all need to make changes if we want to save her and make those changes now.”

Demonstrator Natasha Slabbert said: “Joining in on the protest was both cathartic and exhilarating. Being able to take a stand, be seen, and feel like I was taking action was an invaluable experience. It motivated and soothed me. I feel like there is now hope.”

Ms Tooke said they had more projects in the pipeline, including further protest action against fossil-gas exploration and extraction and against institutions that still financed fossil-fuel projects.

“We are in the planning stages of hosting a public talk: we have invited a local scientist who contributed to the IPCC report to talk about his research and what science is telling us, but the date and venue are still to be confirmed.”