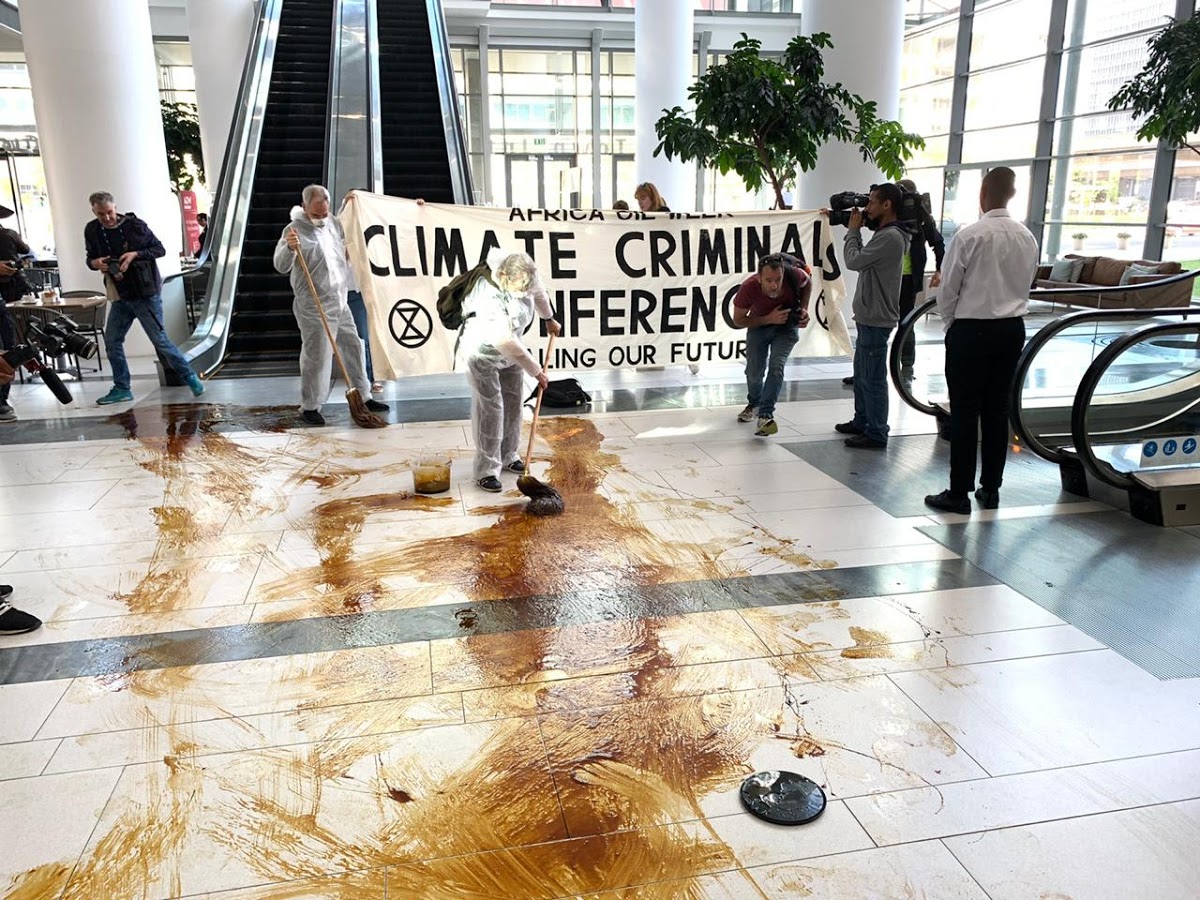 Africa Oil week was marketed as the largest oil and gas event in Africa, and the 26th edition of the conference. Close on 2,000 delegates attended, including 26 government ministers, 250 speakers, with nearly 800 companies represented. South Africa was represented by inter alia the Premier of the Western Cape and the Minister of Mineral Resources.

XR in Cape Town decided on a small, targeted protest action on the morning when the Africa Oil Week conference was opened. The XR media release stated that: “The conference organisers have omitted even the faintest reference to climate change in their programme, which is inconceivably irresponsible considering the severity of our ecological situation. In our global fight to avert a climate catastrophe, we demand from our elected politicians, honourable Minister Gwede Mantashe and Premier Alan Winde, to make an open statement at the Africa Oil Week declaring a climate emergency and withdrawing any support to climate criminals who are complicit in the demise of our planet. Further, we demand from the government of Western Cape and of South Africa, to tell the truth to their people by declaring a climate emergency, to implement emergency measures to combat climate change, to abandon and ban all planned projects in fossil fuels, to oppose fracking in the Karoo, and to oppose offshore Brulpadda field development.”

The first action centred around the pouring of molasses (resembling oil) onto the floor in the lobby of the conference centre. We arrived at the CTICC 2 early on Tuesday morning, and were happy to find no access control as the coffee shop opened onto the street. At the agreed time, two rebels poured the molasses, two rebels held a banner over the bannister on the first floor, while the remaining rebels in hazmat suits “cleaned up” the lobby with mops and held placards and chanted. The group consisted of 12 rebels.

Media coverage was extensive, and listed in the links below:

On Friday 8 November, XR Cape Town Red Rebels had their first outing with 7 rebels. Costumes were procured and fabricated in super quick time, and with the help of YouTube, the rebels performed at noon. The event was again well covered: